The Physics object is the global configuration object for all Excalibur physics.

Excalibur comes built in with two physics systems. The first system is Box physics, and is a simple axis-aligned way of doing basic collision detection for non-rotated rectangular areas, defined by an actor's bounding box.

Excalibur physics are organized into a hierarchy, each has a specific single role in the collision system.

Actor's have position, velocity, and acceleration in physical space, all of these positional physical attributes are contained inside the Body. Only 1 actor can be associated with a Body.

Body is the container for all transform related information for physics and any associated colliders.

Body's have a default box collider that is derived from the width and height of the Actor associated. Only 1 Collider can be associated with a Body, and by extension an Actor. (Collision events are re-emitted onto Actor)

Collider's have CollisionShape's that represent physical geometry. The possible shapes in Excalibur are Circle, Edge, and ConvexPolygon. A collider can only have 1 CollisionShape associated with them at a time.

Actors with the CollisionType.PreventCollision setting do not participate in any collisions and do not raise collision events.

This matrix shows what will happen with 2 actors of any collision type.

To enable physics in your game it is as simple as setting Physics.enabled to true and picking your CollisionResolutionStrategy

Excalibur supports 3 different types of collision area shapes in its physics simulation: polygons, circles, and edges. To use any one of these areas on an actor there are convenience methods off of the actor physics body: useBoxCollider, usePolygonCollider, useCircleCollider, and Body.useEdgeCollider 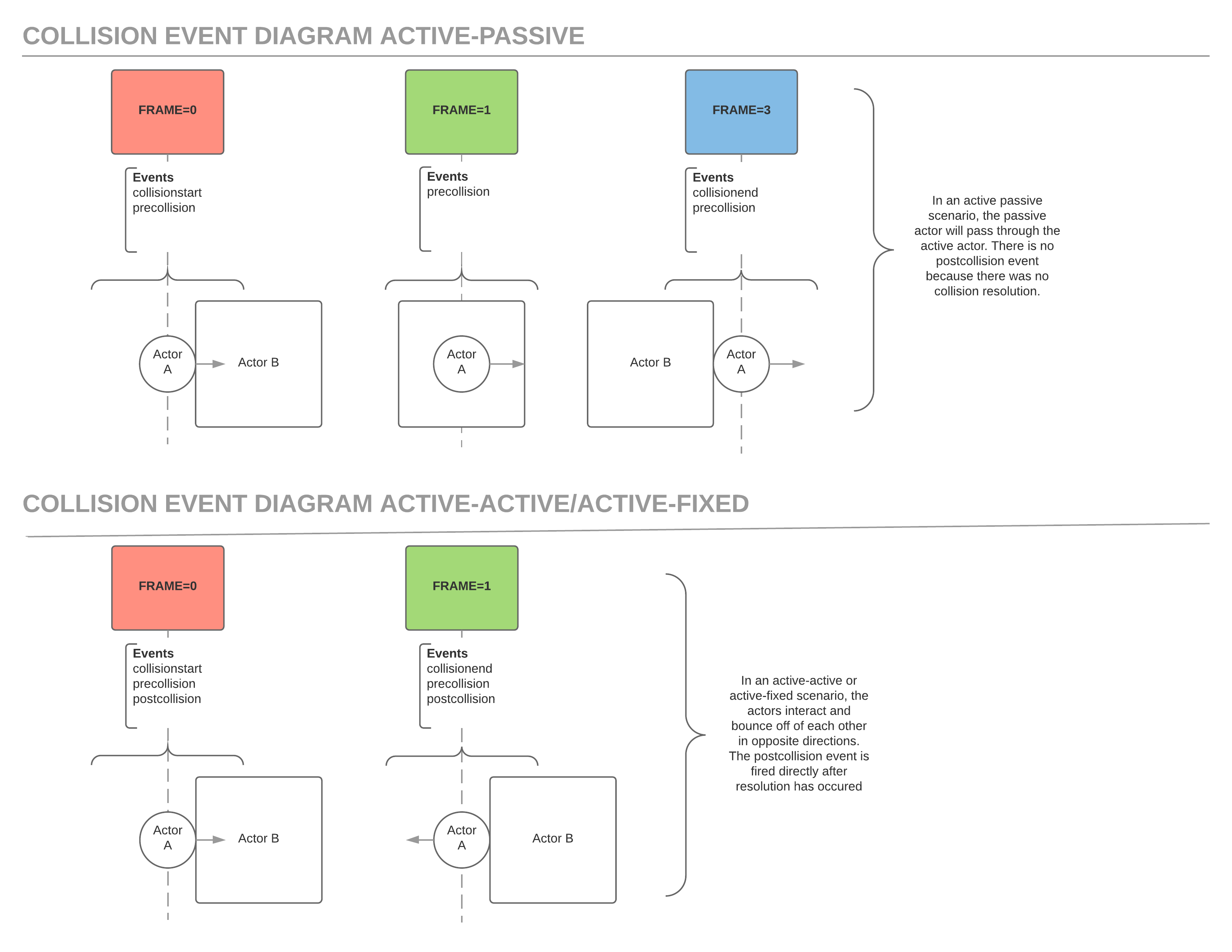 This is a great way to globally simulate effects like gravity.

Globally switches the debug information for the broadphase strategy

Gets or sets the broadphase pair identification strategy.

The default strategy is BroadphaseStrategy.DynamicAABBTree which uses a binary tree of axis-aligned bounding boxes to identify potential collision pairs which is O(nlog(n)) faster. The other possible strategy is the BroadphaseStrategy.Naive strategy which loops over every object for every object in the scene to identify collision pairs which is O(n^2) slower.

Enable fast moving body checking, this enables checking for collision pairs via raycast for fast moving objects to prevent bodies from tunneling through one another.

Gets or sets the number of collision passes for Excalibur to perform on physics bodies.

Reducing collision passes may cause things not to collide as expected in your game, but may increase performance.

More passes can improve the visual quality of collisions when many objects are on the screen. This can reduce jitter, improve the collision resolution of fast move objects, or the stability of large numbers of objects stacked together.

The default is set to 5 passes which is a good start.

Gets or sets the global collision resolution strategy (narrowphase).

Small value to help collision passes settle themselves after the narrowphase.

The default mass to use if none is specified

Globally switches all Excalibur physics behavior on or off.

Number of steps to use in integration. A higher number improves the positional accuracy over time. This can be useful to increase if you have fast moving objects in your simulation or you have a large number of objects and need to increase stability.

Gets or sets the position and velocity positional integrator, currently only Euler is supported.

Show the axis-aligned bounding boxes of the collision bodies on the screen.

Show the normals as a result of collision on the screen.

Show the position, velocity, and acceleration as graphical vectors.

Show the surface normals of the collision areas.

Surface epsilon is used to help deal with surface penetration