To create a new game, create a new instance of Engine and pass in the configuration (EngineOptions). Excalibur only supports a single instance of a game at a time, so it is safe to use globally. You can then call start which starts the game and optionally accepts a Loader which you can use to load assets like sprites and sounds.

You would include your script (or bundle it) on an HTML page and that page does not need anything else.

Excalibur can automatically generate a <canvas> element for you or you can provide your own using EngineOptions.canvasElementId. 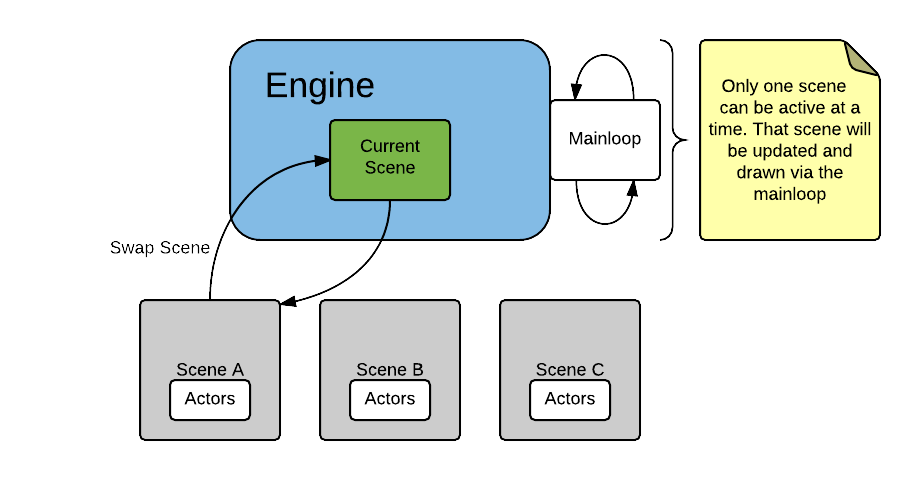 The first operation run is the Update loop. Actors and scenes both implement an overridable/extendable onPreUpdate and onPostUpdate methods. Use them to perform any logic-based operations in your game for a particular class.

The next step is the Draw loop. A scene loops through its child actors and draws each one. You can override the onPreDraw and onPostDraw methods on an actor or scene to customize their drawing. You should not perform any logic in a draw call, it should only relate to drawing.

In Excalibur there are option bag constructors available on most types. These support any public property or member, methods are not supported. The API documentation does not provide an exhaustive list of possible properties but a list of commonly used properties.

For example instead of doing this:

In fact you can create a duplicate this way

Types that support option bags can have their properties mass assigned using the assign method.

When working with events, be sure to keep in mind the order of subscriptions and try not to create a situation that requires specific things to happen in order. Events are best used for input events, tying together disparate objects, or for UI updates.

Excalibur events follow the convention that the name of the thrown event for listening will be the same as the Event object in all lower case with the 'Event' suffix removed.

Actors implement an EventDispatcher (Actor.eventDispatcher) so they can send and receive events. For example, they can enable Pointer events (mouse/touch) and you can respond to them by subscribing to the event names. You can also emit any other kind of event for your game just by using a custom string value and implementing a class that inherits from GameEvent.

You can also create an EventDispatcher for any arbitrary object, for example a global game event aggregator (shown below as vent). Anything in your game can subscribe to it, if the event aggregator is in the global scope. Warning: This can easily get out of hand. Avoid this usage, it just serves as an example.

Excalibur does not provide any out-of-the-box way to manage game state but typically you can either use class properties or introduce something more sophisticated like a state machine.

The benefit of something like a state machine is that state can be separated from the actions an actor may take and you can then save and load state more easily to enable save game management. You could choose for example to have a global game state that you can serialize and deserialize.

Have you implemented state management in your Excalibur game? Let us know!

Call Engine.showDebug with a true or false to enable or disable Excalibur's debug feature. This will enable actor debug drawing to help diagnose drawing issues.